Maryland’s history and tradition of waterfowl hunting is as rich as any in the world. Presidents and kings have been drawn to hunting ducks on the Chesapeake Bay for centuries. When English Captain John Smith first discovered the Chesapeake Bay, he remarked that “heaven and earth have never framed a better habitat for mankind.” These immortal words will resonate with any sportsman who sees the Chesapeake Bay for the first time.

No article on the early days of waterfowling is complete without mention of the Chesapeake Bay and places such as the Susquehanna Flats, where the Decoy Capital of the World calls Havre de Grace home in Harford County. Maryland has some of the best duck hunting opportunities on the East Coast: From body booting on the Susquehanna Flats; hunting canvasbacks off shore on the Potomac River and wood ducks in flooded timberlands; to hunting sea ducks on the vast Chesapeake Bay.
Puddle ducks are typically birds of fresh, shallow marshes and rivers rather than large lakes and bays. They are good divers, but usually feed by dabbling or tipping rather than submerging. The speculum, or colored wing patch, is generally iridescent and bright, and often a telltale field mark. Any duck feeding in croplands will likely be a puddle duck, as most of this group is sure-footed and can walk and run well on land. Their diet is mostly vegetable, and grain-fed mallards or pintails or acorn-fattened wood ducks are highly regarded as food.
Diving ducks frequent the larger, deeper lakes and rivers, and coastal bays and inlets. The colored wing patches of these birds lack the brilliance of the speculums of puddle ducks. Since many of them have short tails, their huge, paddle feet may be used as rudders in flight, and are often visible on flying birds. When launching into flight, most of this group patters along the water before becoming airborne. They feed by diving, often to considerable depths. To escape danger, they can travel great distances underwater, emerging only enough to show their head before submerging again. Their diets of fish, shellfish, mollusks, and aquatic plants make them second choice, as a group, for sportsmen. Canvasbacks and redheads fattened on eel grass or wild celery are notable exceptions.

Duck season, both puddle and diving, ranges from October through January on specified dates. The season is broken up during these months as it coincides with deer season.

While non-resident hunters can hunt duck on public lands, they are only allowed to hunt open waters if they are accompanied by a Maryland resident.  With some of the best duck hunting opportunities on the East Coast happening in the Chesapeake Bay and Maryland’s waterways, joining up with a guide is ideal.

Licensed guides have access to a range of the best duck hunting opportunities in Maryland. Without their accompaniment, non-resident hunters have a difficult time getting the most out of a duck hunt. With the help of a guide, you can go body booting in the famed Susquehanna Flats for canvasbacks, hunt in offshore blinds, call in flocks of mallard and black duck while bunkered down in flooded impoundments, or organize a specialized hunt that won’t soon be forgotten.

Novice hunters may find a Regulated Shooting Area (RSA) more suitable for their first time duck hunting in Maryland. A RSA is a tract of land, including any waters, on which the licensee may release and shoot captive-raised pheasant, bobwhite quail, chukar partridge, Hungarian partridge, and mallard ducks. Great for first-time bird hunters, RSAs offer a chance to hone their skills before heading out on a more difficult hunt. Visit the Maryland Department of Natural Resources' website for a full list of RSAs in Maryland.

Maps and descriptions of Sea Duck and Offshore Waterfowl Hunting Zones are available from DNR Wildlife & Heritage Service Offices listed in Addresses & Phone Numbers. Nonresidents must be accompanied by a Maryland resident while hunting in designated waters.

Simple, quick, and at the palm of your hand, DNR’s app is the easiest way for both residents and non-residents to get a Maryland hunting license. Download the app on your smartphone (MD DNR), click Apply for License, and enroll. From the app, you can also register any kills, post photos, and check for regulations updates. Or, you can apply for a license through Maryland Department of Natural Resources’ website. A Regular Hunting License, Junior Hunting License, any Senior Hunting License, or a Nonresident (full term or short term) Hunting License is required to hunt migratory game birds in Maryland. 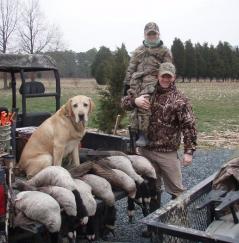 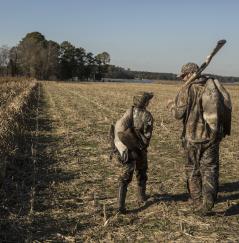